Extended DISC® Personal Analysis allows a person to gain clarity about who they are, their strengths, development areas and motivators. 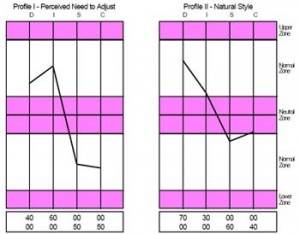 Profile II illustrates a person’s natural response to an external stimulus. It is the behavioural style that takes the least energy and effort, requires the least amount of concentration and is usually the most pleasant to the individual.

It is possible to define action and thinking models to a person’s natural behavioural style by using Profile II. Any significant and large changes in it usually mean significant events and changes in the immediate environment of the individual that are forcing him or her to seek new ways to succeed.

Profile I illustrates how the person feels he/she has/wants to adjust his/her behaviour to cope with the requirements of the present environment. Profile I demonstrates the individual’s conscious understanding of one’s self and own behaviour in the present situation (conscious self image).

Dr. Marshall Goldsmith - One of the top ten executive educators

The purpose of the tool was to help team members learn how to communicate and how to give and get peers feedback. Later it was found that the tool is applicable in several other applications that relate to increasing effectiveness in communication.

Open 360 is a tool that team members remember for years afterwards. It gives the team a unique atmosphere of open communication and sincere honesty. For an individual it provides an opportunity to be the center of attention with everyone trying to support and encourage. It is also a tool for receiving feedback.

It is often recommended that Open 360 not be the first tool to begin with. It doesn’t allow you to hide in your room or behind your job position. It is a tool that enables one person to give feedback to another person. The Extended DISC® Open 360 feedback session should always be facilitated by an external (to the team) facilitator.

Extended DISC® Job Analysis was developed to its present format in 1996. The preceding versions date back to 1992. At that time, the Extended DISC® System was already used extensively to support the interview process when recruiting new people. It was felt that the interviewers needed more support to assess the Personal Analysis results and to understand the behavioral requirements of a job.

Extended DISC® Job Analysis was created to increase that understanding, by providing a best match between the benchmarked job requirements and the interviewed candidates. The power of the tool soon enabled Extended DISC to include in the list of its applications many consulting processes, and that was when the assessment system got it’s reputation as a significant and important consultancy tool.

Extended DISC® Job Analysis is a very down-to-earth product; it aims for perfection by pinpointing even very small parts within a job description that do not fit in the ideal Job Profile, therefore forcing the organisations to succeed. The result and the benefit you can get from this tool is a powerful and effective organisation where every individual can perform in tasks where their biggest natural strengths are utilized.

Extended DISC® Work Pair Analysis was originally developed to help organizations with personnel appraisals. It has now been extended to many other applications. It is an excellent tool to help the work pairs discuss their individuality and their way of working together and with others.

Work Pair Analysis should always be supported by a discussion. Extended DISC® Work Pair Analysis goes beyond organizational status, possible age differences, or any other circumstantial factors that would prevent the two individuals from communicating openly and understanding each other. It considers everyone as an individual with natural tendencies that are compared against other individual’s natural tendencies.

It also shows the results on a team level, demonstrating how the team is operating as one unit. It is also a strong management tool showing the existing management style and comparing it against the ideal style, thus identifying the gaps between the two. This gives the management a clear detailed picture of areas where changes in managerial behavior are needed.

Extended DISC® Team Analysis is a powerful team building tool. It opens the eyes of the team to see the positive strengths in each team member, by combining the same data of each individual collected for the Personal Analysis.

It increases the understanding of how and why we are different but at the same time so valuable to each other. For the team leader it provides a huge amount of information that helps the leader build and manage a winning team. Extended DISC® Team Analysis is designed to support different learning styles so that we can find the information we need in an easy to use format.

Extended DISC® Surveys Platform is an online platform that allows clients to conduct survey applications using their own instruments. It eliminates the administrative frustrations by automating the process.

Surveys Platform is a customisable and flexible tool for conducting large scale surveys cost effectively. Organisational Climate Surveys and Customer Satisfaction Surveys are among the most popular applications.

An extremely useful tool in a variety of contexts

We have found Extended DISC® to be an extremely useful and popular tool in a variety of contexts. Participants have been able to instantly apply the new knowledge at work and at home. Highly recommended.

How can I learn more?

Contact one of SuperSelf's Accredited Extended DISC® Practitioners today. We can answer your questions and provide you with a sample report. We are confident that you will like what you see.

An extremely useful tool in a variety of contexts

We have found Extended DISC® to be an extremely useful and popular tool in a variety of contexts. Participants have been able to instantly apply the new knowledge at work
…
and at home. Highly recommended.

Read more “An extremely useful tool in a variety of contexts”

Dr. Marshall Goldsmith - One of the top ten executive educators

Extended DISC® provides our company with all of the employee and organizational development tools we need.